With Vice, Sunless Rise and Catalyst 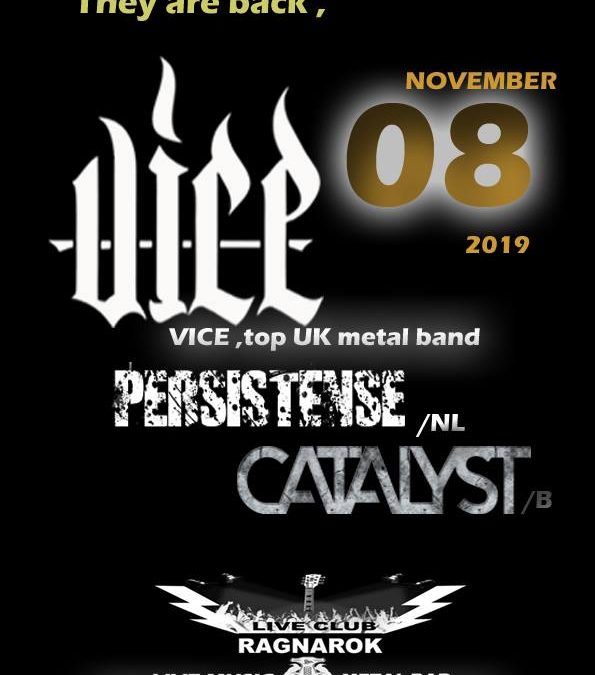 Vice is a Manchester UK based Metal band, formed from a shared vision to breathe fresh life into the music world and to display their diverse collective tastes and influences through their music.
Vice exhibit a brand of blistering head banging, hair swirling, modern Metal that is full of powerful riffs, time and tempo changes, combined with an energetic, passionate show and a high standard of performance and musicianship.
The songs have the feel of powerful anthems with strong melodies and hooks and are influenced by bands like Machine Head, Meshuggah, Lamb of God and Dream Theater; they combine a blistering guitar attack, powerful virtuoso rhythm section and stinging Vocals. 2016 culminated in the band’s debut performance at the Mighty Bloodstock Open Air and they have shared the stage with Artists such as Sepultura, Skindred, Hellyeah, Absolva, One Machine, Tim (Ripper) Owens, Blaze Bayley, and Babylon Fire, receiving fantastic feedback from fans, as well as critical acclaim from the likes of Get Your Rock Out, Planet Mosh, Manchester Rocks, The Moshville Times, Down The Front Media, Metal Temple and Rockfiend Publications. The band has worked hard to achieve a very strong reputation, as an exciting, quality live act and their debut album ‘The First Chapter’ was released in April 2017 to overwhelming acclaim from critics and fans alike.
2018 has seen the band play HRH Metal, Hammerfest X and Amplified Festival along with their first run of European tour dates in Belgium in April and November of this year. They have also secured the main support slot with Blaze Bayley, for a run of UK show in 2019. The band is also currently writing songs for their follow up album.
Vice is Tom (Aki) Atkinson, Lead Guitar/Lead vocals, Aiden Lord Bass Guitar/Backing Vocal, Connor Summers, Drums.